The coconut oil connection for curing brain ailments has been “hot news” for the past few years since Dr. Mary Newport discovered how much it helped her husband Steve. Far and wide people seem to have learned about coconut oil assisting memory! Yet there is more to the story .  .  .

Out of curiosity after discovering my own mother’s immense improvement was mainly due to the MEM-PRO ingredients, I decided to review Steve Newport’s diet at Dr. Newport’s website. To anyone with severe memory loss, I would recommend this diet and the coconut oil of course.

However, the point I don’t want you to miss is that Steve Newport is also taking the MEM-PRO ingredient of phosphatidylserine (PS) on a daily basis! It stands to reason that the PS in his diet may not be getting enough credit for his improvements!

Take a look at Dr. Newport’s page on his diet: 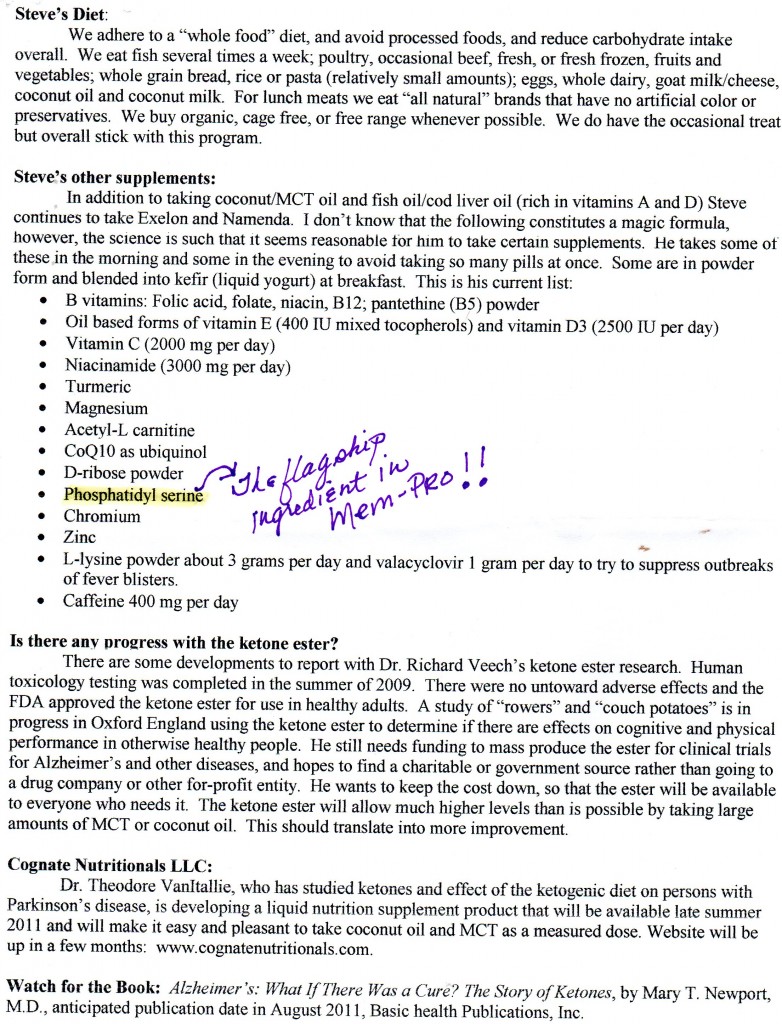 There you have it, folks! Dr. Newport wrote it and I have highlighted it for you! Steve’s daily diet also includes phosphatidyl serine (PS) –the flagship ingredient of Mem-Pro!

His memory loss improved immensely like my mother’s. Yet, I am convinced it was not just the coconut oil, since he was also taking the PS of MEM-PRO, but many people are concluding that it is all about the coconut oil! And that’s just not true!

When my mother first took the MEM-PRO ingredients and became well, I also had her on a slew of other nutrients including wheat grass and many of the vitamins listed above.

When she felt like her old self and thought she was all better a few years later, she stopped taking all the nutrients and guess what? She lost her memory again for a second time! But the 2nd time, when she showed up ill to visit me, I just gave her the MEM-PRO and that was all she had. I had no clue whether she would improve. Lo and behold, her memory returned within a few weeks!  She moved to the mountains within a month and got her own cottage. She still lives very happily on her own by her own choice at 92 and takes 6 MEM-PRO faithfully daily!

Use Mem-Pro holiday discount code "Mem-Pro 3 for 2" for $59 two pack to receive a 3rd Mem-Pro bottle free as a bonus!

Memory loss, brain fog, focus and mood disorders can all be overcome by rebuilding necessary brain fluids and membranes. The research verifying the ingredients in MEM-PRO™ for rebuilding the brain exceed 2800 studies! Thank you for visiting & learning more about this amazing product!

Yes! It's true! The brain heals! You can prevent & reduce brain fog, focus & memory issues! Check out the research at Mem-Pro.com !

Memory loss, brain fog, focus and mood disorders can all be overcome by rebuilding necessary brain fluids and membranes!

Mem-Pro was created by Dr Jill after 40 years offering therapies. Pardon the pun, but it's so helpful, it's a no brainer!